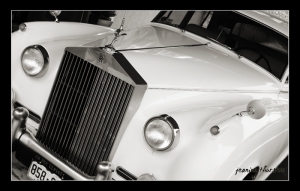 Brrrr.  Oct. 10th, 2009 for a wedding – and that morning all you heard about was 20 car pile ups in Colorado Springs, and tons of accidents on I-25 due to the icy road conditions.  Happy to say the roads dried off by the time I was off to Lindsey & Todd’s wedding… but still a bone chilling 20 degrees according to my car.  So… not much for outdoor photos, but they were die hard and slipped out for a few outdoor photos anyway… even though it has dropped to 17 degrees by the time it was portrait time.  It didn’t matter – as they still had a smile on their faces – just so happy to be having their wedding.  The beautiful car almost didn’t make it – as it was having a crisis about the weather… but the engine finally gave and the RR made it for a few shots with the bride & groom.

Their son Oliver was the life of the party… never stopped for more than a second the entire day and evening – the energizer bunny was on his side… and won for the most part, until we caught him hiding under mom’s gown!  He was taking in every corner and hiding place at Cielo at the Pines, and there was no space left undiscovered by the handsome 2 year old.

The dress was stunning on Lindsey – and I’m sure she won’t mind me saying that she got it at a consignment shop in Colorado Springs… it was amazing, and with her accessories (including a beautiful comb) she was stunning!

Then of course it goes without saying, the entire day is a whirlwind for the bridal couple… especially the bride – with all of the preparation finally coming together. 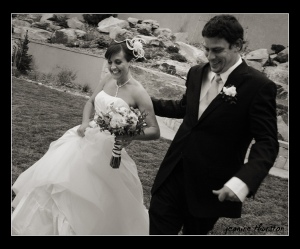 I love the smile that they get as I tell them it is finally time to go in and enjoy the rest of the evening. But not without a little fun in photographing the guys.  It doesn’t matter how formal the wedding, the men are always more happy after some fun photos instead of being stiff all the time, and they were cold – so I told them to warm up by the fire.  They decided above the fire was more appropriate!Then at last – with all of the chaos going on around them Lindsey and Todd were able to catch a moment together on the dance floor, and block out the rest of the world.